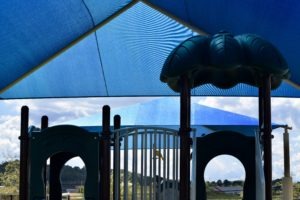 Shade canopies cool equipment and surfacing that otherwise would be too hot to the touch this summer.

Early research on touch temperature limits provides the following guidelines when it comes to hot surfaces and water immersion:

120°: Burns after five to ten seconds in hot water for small children and the elderly.

140°: Burns after one minute of contact or hot water immersion for the average adult.

160°: Rapid burns and blistering after contact with a firm surface of this temperature or water immersion.

This indicates that surfacing of many recreational areas, e.g. playgrounds, basketball courts, tennis courts, etc. is too hot for safe use during peak hours in the summer months of many areas of the United States. Fortunately, researchers have also found that the presence of shade, either by way of trees or shade canopy, greatly reduces these high temperatures, in some cases, by up to 20 degrees.

A multiscale analysis of surface temperatures in Arizona reported a significant drop in temperature of equipment and surfacing under the shade. “What Vanos and her colleagues found was striking…the rubber surface on which the playground was constructed, which was soft to cushion falls and colored green and black, was recorded at 87.2 degrees Celsius in the sun at noon, less than 13 degrees from the boiling point of water. In the shade of a tree however, that same surface was recorded at 42.2 C, and under the shade sail was measured at 46.7 C, both much closer to the air temperature of 41.6 C.”

Ideal for ball courts, pools and playgrounds, outdoor exercise areas and other recreational zones, Pro Playgrounds offers a wide range of shade structures to provide relief from the heat and protect those at play. Explore our shade canopy selection today.