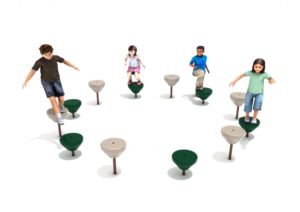 The physical benefits of playgrounds are widely recognized, but what about the mental benefits? Regular physical outdoor activity has been associated with better attention span, improved energy, elevated social skills and more. Parents can get children off to a healthy state of mind by taking them to their local community playground.

The playground is a primary avenue for social development in young children, often times the first place children interact with others in their age group. Children learn to work together towards a common goal, play with one another and problem solve as a team on the playground. Young children who play with other children on community playgrounds often display improved speech and vocabulary. This is a result of their increase in social interaction and development. Children even develop conflict resolution and negotiation skills as they learn to compromise with one another. Community playgrounds extend social interaction beyond children to caregivers and parents as well.

An article in Psychology Today explores the relation between a reduction in unstructured play and an increase in depression in children following a study by San Diego State University indicating significant increases in anxiety and depression in children over the past 50 years. “Free play and exploration are, historically, the means by which children learn to solve their own problems, control their own lives, develop their own interests, and become competent in pursuit of their own interests.” This indicates that a healthier state of mind in children can be achieved by enabling them to play freely outside. The drastic decrease in time spent outdoors in children in the United States was largely attributed to a rise in the use of technology indoors, e.g., watching television, streaming media on mobile devices and playing video games. The study also pointed to an increase in parental control and vigilance.

An analysis by the UMKC School of Education and Family Development Center on outdoor play’s impact on brain development in children explains that “many of the fundamental tasks that children must achieve, such as, exploring, risk-taking, fine and gross motor development and the absorption of vast amounts of basic knowledge, can be most effectively learned though outdoor play.” Regular physical activity was also related to a reduction in stress and improved sleep. While the long-term effects of not spending enough time outside can be detrimental to one’s mental health, the solution is simple. Get outside and play! Hiking, sidewalk art and visiting your local playground are just a few great ways to get your children spending more time playing freely outside.